Joint issue of Belarus and Armenia -2011

On June 1, 2011 the Ministry of Communications and Information of the Republic of Belarus  has issued the stamps “Minsk” and “Yerevan” from the series “Joint issue of Belarus and Armenia. Capitals”.

Minsk is the capital of the Republic of Belarus. It is situated on the Svisloch and Nemiga rivers. Minsk has an ancient history. The earliest references to Minsk date to the 11th century (1067). The city’s name comes from the river Menka, which was the tributary of Nemiga.
In 1974 Minsk was awarded the honorary title “Hero City” in commemoration of its citizens’ services in the fight against fascism during the Great Patriotic War. Minsk is the administrative, cultural and industrial centre of the country. At present the Executive Committee of the Commonwealth of Independent States (CIS) is located in Minsk
The stamp “Minsk” shows “The City Gate” in the Railway station square and Victory square.

Yerevan is the capital of the Republic of Armenia. It is situated in the north-eastern part of Ararat plain and partially on the volcanic plateau at the height of 850 to 1300 meters above sea level.
Yerevan is one of the oldest cities of the world. In the Armenian historical literature it was first mentioned at the beginning of the 6th century. The history of Yerevan dates back to the 8th century BC with the foundation of the fortress of Erebuny in 782 BC by King Argishti I (hence the name of the city). 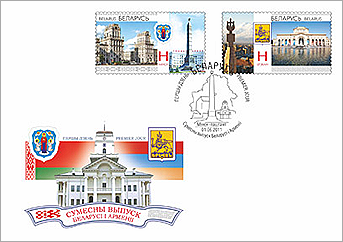 The stamp “Yerevan” pictures the building of National Gallery of Armenia and the monument dedicated to Armenia as the first country in the world that in 301 adopted Christianity as the official religion.
Sheet-let also has issued consist of 6 single value stamps and has been marked with the  both country flag. 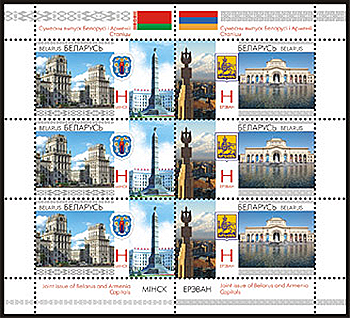