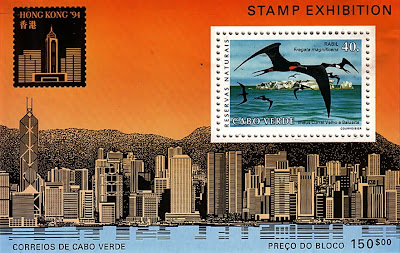 Carbo Verde issued the souvenir sheet composed of one stamp depicted Rabil, and Fregata magnificens as their distinctive with background of Hongkong City picture as the commemorative stamp to their participation at the Hongkong Stamp Exhibition 1994.

Rabil, is the island's second largest town located 3 km south of the island capital of Sal Rei in the island of Boa Vista, Cape Verde. Its population is approximately 1,000. Rabil is closed to the nearby airport. The town also serves a gas station as well. Electricity, communication, other necessities are available in the mid to late 20th century style. The areas around Rabil are almost entirely flat and deserted with rocks making it look like no grasslands. Several mountains can be seen to the southern and eastern parts of the island as well as grasses and marshes by the shoreline to the west.
The standards of living are in the low to middle range as well as its income. A part of the population are farmers and are based in agriculture where banana plantations, pineapple and other crops are common, the rest works in shops, ports and other businesses.
Fregata magnificens is widespread in the tropical Atlantic, breeding colonially in trees in Florida, the Caribbean and Cape Verde Islands. The size of bird is 100 cm long with a 215 cm wingspan. Males are all black with a scarlet throat pouch which is inflated like a balloon in the breeding season. Although the feathers are black, the scapular feathers produce a purple iridescence when they reflect sunlight. Females are black, but have a white breast and lower neck sides, a brown band on the wings and a blue eye ring. The Fregata magnificens is silent in flight, but makes various rattling sounds at its nest. This species feeds mainly on fish, and also attacks other seabirds to force them to disgorge their meals. Frigatebirds never land on water, and always take their food items in flight.
Posted by Flonastamp09 at 2:31 AM