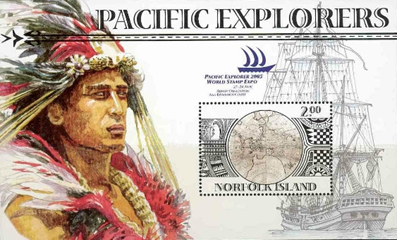 This issue stamps was launched at the International Exhibition on this theme in Sydney April 2005 by Norfolk Island Post for commemorating their participation.
The stamps feature the pacific explorers , The Polynesians who roamed the oceans and camped on Norfolk Island , Captain Cook who found many places throughout the pacific , Ferdinand Magellan who first circumnavigated the world. Who is the greatest Pacific explorer ?