In the days 21 to 24 April 2005 , Sydney the World Philatelic Exhibition held with the motto Pacific Explorer. Polish Post has commemorated this important for philatelists and post administrations event by issuing a special post stamp in the form of a block. 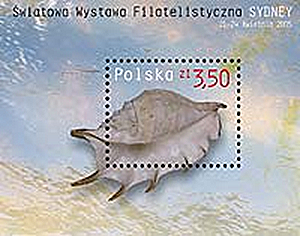 The presented post stamp in the form of a block was created in co-operation with the Museum of Asia and Pacific in Warsaw in which collection are interesting objects linked, among other, with Pacific Ocean and Australia. The presented on the stamp the shell is a shell of Lambis trucicata. 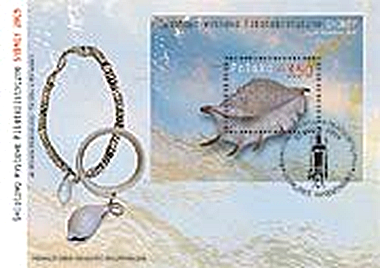 The shown on the FDC necklase has been done of shells of Cypraeidae and white shells of Ovula ovum. The placed near by bracelet mvoli with the white bracelet Ovula ovume comes from the island Trobianda.