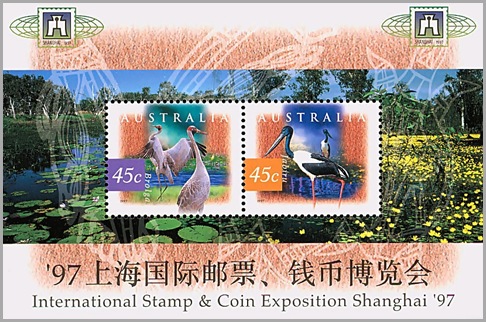 Australia Post has participated at the International Stamp and Coin Exposition Shanghai 1997. They issued a souvenir sheet composed of 2 stamps depicted water birds, Brolga and Jabiru with background picture of water lilies at the lake.

Brolga is a common gregarious wetland bird species in tropical and eastern Australia, well known for its intricate mating dance. It is the official bird emblem of the state of Queensland.The Brolga (Grus rubicunda), is a bird in the crane family.

Jabiru or the Black-necked Stork (Ephippiorhynchus asiaticus) is a long necked and tall wading bird in the stork family Ciconiidae. It is a found across Asia and Australia where it is a resident in wetland habitats. The birds have characterized in white and glossy blacks with a strong bill. Adult males and females are alike in plumage but the colour of the iris differs.