YEAR OF SPAIN IN RUSSIA AND RUSSIAN IN SPAIN 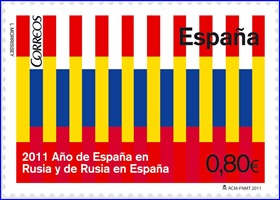 The proposal to hold the Spain-Russia Dual Year 2011 came at the initiative of the Prime Ministers of the two countries at the International Conference held in the Russian city of Yaroslavl, in September 2009.The proposed objective aims to strengthen scientific relations, culture and education, and to promote economic and trade contacts between Russia and Spain.

The Year Dual has been an important step in Spanish-Russian relations and the rapprochement between the two peoples. Among the planned activities include holding forums between universities, ballet and music festivals, the temporary exchange of masterpieces from the Prado Museum (Madrid) and the Hermitage (St. Petersburg), and establish channels of communication between employers to improve contacts between the various sectors, facilitate investment and trade.

Therefore both of Philately countries,  joins the event by issuing a commemorative stamp and  the issued stamp, designed by Lucinda Morrissey, interspersed with vertical stripes colors of the flags of Spain and Russia: red and white in the first strip, yellow and blue in the second, and red in the final stretch with the inscription 2011 year Spain in Russia and Russia in Spain.