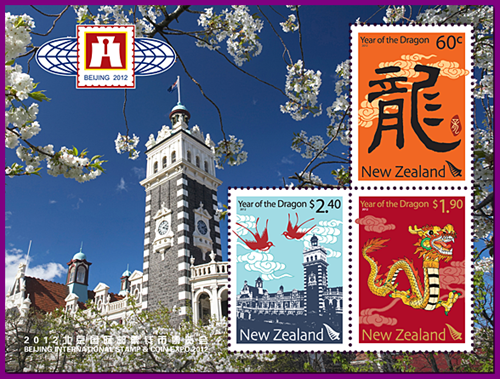 Since its first opening in 1995, the Beijing International Stamp and Coin Expo has developed into one of the most prestigious numismatic and philatelic events in Asia. In 2011 the three-day show attracted over 200 exhibitors and more than 30,000 visitors.  In 2012, this expo will be held at the Exhibition Hall of the China World Trade Center in Beijing - China's bustling capital city. It will provide an opportunity for Chinese and international exhibitors to showcase their numismatic and philatelic products on a global scale.

New Zealand Post has issued a unique exhibition miniature sheet and souvenir cover to celebrate the expo.  The souvenir miniature sheet incorporates three stamps from the 2012 Year of the Dragon stamp issue set against an image of the Dunedin Railway Station, which also features on one of the stamps. Dunedin was one of the earliest settlements for Chinese immigrants in New Zealand.