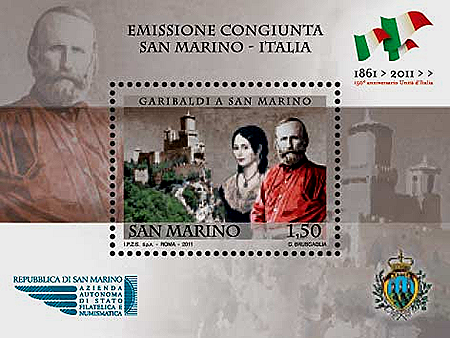 On the occasion of the 150th anniversary of the Unification of Italy, this joint issue between San Marino and Italy commemorates the figure of Giuseppe Garibaldi.
Fleeing from the Austrians following the events of 1849, the “Hero of the two Worlds” sought refuge in San Marino with his companion Anita and his troops. At that time, the Republic of San Marino was participating actively in the Risorgimento movement: it offered shelter to illustrious Italian exiles, while numerous Sammarinese volunteers took part in insurrectionary movements and the wars for Italian independence.

Garibaldi always felt love and gratitude for San Marino and, in acknowledgement of the honorary citizenship bestowed on him on the 24th of April 1861, was to write, “I am proud to be a citizen of such a virtuous republic,” and “I thank you for the present which will always remind me of the generous hospitality of San Marino in a moment of extreme danger for me and for Italy.”
The souvenir sheet features in the centre a stamp with a value of €1,50. In the foreground the figures of Anita and Giuseppe Garibaldi with the First Tower in the background.The sheet issued on June 4, 2011 and designed by C. Bruscaglia.
LiveJournal Tags: Italy,San Marino,Giuseppe Garibaldi
Posted by Flonastamp09 at 8:36 PM