To commemorate the attendance of the Pitcairn Islands Philatelic Bureau at the International Stamp Exhibition in Delhi in February (Indipex 2011), a miniature sheet has been produced featuring important images from both locations. India is represented by the national flower Lotus Nelumbo nucipera gaertn and the internationally known Taj Mahal, while Pitcairn is represented by the endangered Yellow fautu Abutilon pitcairnense. Both flowers have been brought together in this colourful miniature sheet. 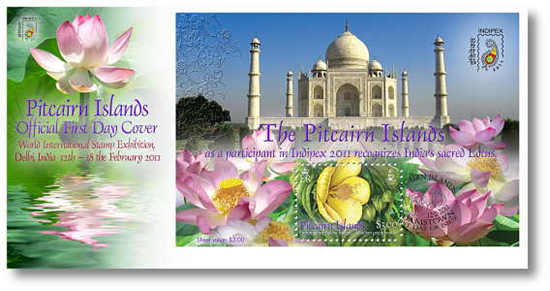 Abutilon pitcairnense or Endangered Yellow fautu  remains listed as a critically endangered species (IUCN 2000). The plant itself is described as a sprawling shrub, approximately 1M tall with alternate leaves 13 x 9cm.The flowers are somewhat bell shaped and appear to be nodding. They are yellow with 3cm long petals. The plant is found in scrub on often unstable slopes, and flowers in July / August.
Posted by Flonastamp09 at 9:48 AM