Iceland and Malta are the northernmost and southernmost islands in Europe.  Fishing has been the main source of revenue for centuries on these two islands.
Iceland Post and Malta Post has been collaborating on a joint stamp issue occasioned by this relationship with fishing towns as the motif, featuring 'Fishing Villages' .  This set was issued on 15 September 2011. 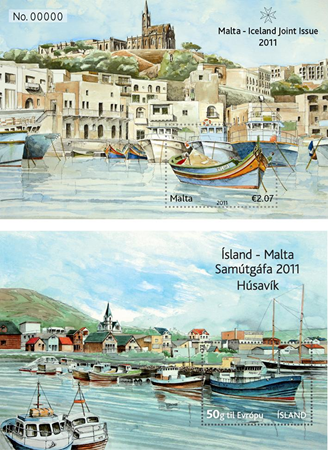 The town of Húsavík is the motif of the Icelandic mini-sheet while the Maltese one depicts the town of Mgarr, Gozo.
The Republic of Malta is a small and densely populated country on an island by the same name and some smaller islands in the Mediterranean. The islands are located between Italy in the north and the north-coast of Africa. The official languages are English and Maltese. Malta joined the European Union in 2004 and is now the smallest EU country both as regards size and population. Only three of the biggest islands are populated: Malta, Gozo and Comino.
Posted by Flonastamp09 at 4:23 PM