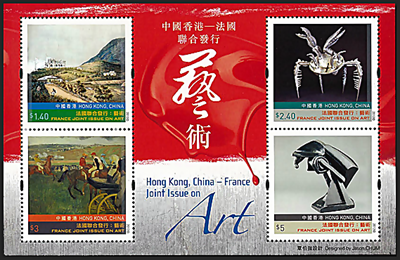 Art is the creation and expression of aesthetics in various forms, with the intention of stimulating thoughts and emotions. Many art masterpieces have become cultural assets of national importance. The collection, conservation and interpretation of significant works of art can help raise people's level of artistic appreciation and promote creativity, both locally and globally.
Hong Kong Post and La Poste have come together to issue a set of four stamps that showcase vintage paintings and contemporary sculptures from Hong Kong, China and from France. This joint stamp issue demonstrates the great passion for art that Hong Kong, China and France share, and showcases the cultural treasures of the two places. 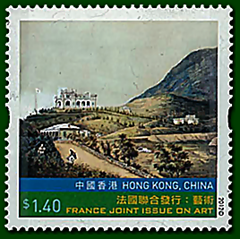 The $1.40 stamp represented the painting art - Douglas Castle by a Chinese artist, 1860s from Hong Kong.

Douglas Castle was named after the Scottish businessman Douglas Lapraik who built it in the 1860s. In 1953, the castle was acquired by The University of Hong Kong to use as a residential student hall and renamed University Hall. It was declared a monument by the government of Hong Kong on 15 September 1995.

Although this work was done by an unknown Chinese artist, the painting materials and the realistic rendering are of Western origin. The castle feature takes up only a small portion of the picture, fronted with human characters, roads, grassland and other houses. The scenery is natural and true to life with a clear contrast between near and far. By using the perspective of the West, the attention of the viewer is drawn to the castle, which is distinguished as the subject of the painting.4c This canvas, in watercolor and gouache, is stored at the University Museum and Art Gallery, The University of Hong Kong. 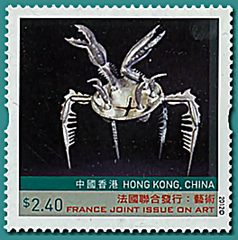 Cheung Yee is one of the pioneers in introducing modern ideas into Chinese sculpture. His art allows the viewer to get a glimpse into aspects of modern art and ancient culture.
Attracted by the distinctive form of the crab, Cheung collected hundreds of "crabs", from plastic toys to well-made porcelain sculptures, which formed an important source of artistic inspiration for him. His Crab #4, two cubic feet in size with two chelae, four claws, a pan-like shell and four hooks, is an abstract form that embodies a sense of pride and aggressiveness. The bronze Crab is collected by the Hong Kong Museum of Art. 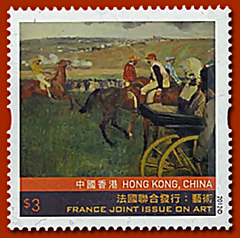 Deemed as one of the founders of Impressionism, Edgar Degas (1834 - 1917) was a famous French painter, sculptor and printmaker. This painting illustrates a moment before the race begins. The differing planes on which the various protagonists are situated separate each of their roles in the picture. Each person is depicted from a different angle, and a large part of the canvas remains empty, almost as if it were a moment of real life. This painting is kept in the Musée d'Orsay in Paris. 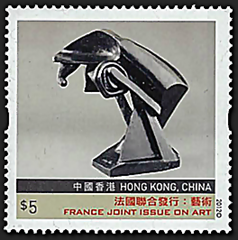 Raymond Duchamp-Villon (1876 - 1918) was among the vanguard in modern art to apply the principles of Cubism to sculpture. A horseman himself, Duchamp-Villon created this sculpture following a great number of sketches and studies of a leaping horse and rider. It represents a hybrid between the horse and the machine, and could be considered an illustration of the expression "horsepower", setting off a fusion between vitality and mechanical power in a manner akin to Futurism. The Horse was made with plaster in 1914 and later cast in bronze. This cast is kept in the Musée National d'Art Moderne in Paris.