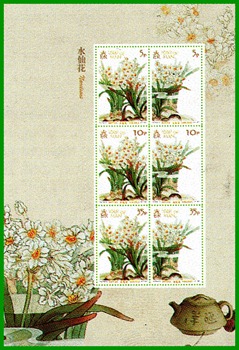 The Isle of Man Post Office is pleased to present a set of stamps featuring the Narcissus flower commonly known as the Daffodil on the first  September 2011. The issue released to coincide with their attendance at the 27th Asian International Stamp Exhibition Wuxi, Jiangsu, China. This exhibition held in November 2011. The  stamps form part of a  collection of issues from a number of countries depicting Chinese Flora.
The issue compose of six stamps in one miniature sheet, depicts the uniform pair of Narcissus image with face value 5p, 10p, and 35 p . 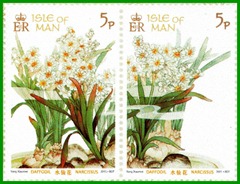 The old cultivar Narcissus telemonius plenus ‘Van Sion’ , become so common in Mann that it is referred to as the ’wild daffodil’ . It is curious bloom, sometimes with just the trumpet doubled, sometimes with a complete double ruff of shaggy petals, and occasionally with green streaks in the yellow. 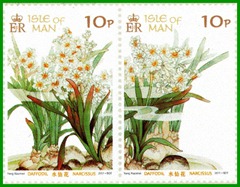 Daffodils are as well loved in the Isle of Man as they are right  across the British Isles. Every Island garden shows its rich drifts of cream and gold to welcome the sun in spring. The flowers are to be seen growing in yellow masses in the Island’s beautiful wooded glens and landowners have planted thousands of bulbs along roadside hedgerows. 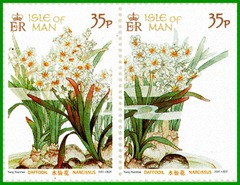 The dainty scented Narcissus minor is called the Manx ‘Jonquil’ and can be seen widely, especially in the North of Island. In view of the Island’s long seafaring tradition, it has been suggested that Narcissus minor was probably brought home by a Manx sailor direct from the Iberian peninsula. (Source: IOM Bulletin News)
Posted by Flonastamp09 at 11:54 AM