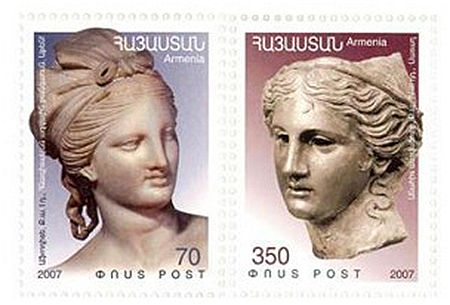 Aphrodite: Goddess of love, beauty and fertility in Greek mythology. The Aphrodisiac festival was held in the central parts of Greece, especially in Athens and Corinth. The sculpture is kept in the National Archaeological Museum of Athens.
Anahit: Goddess of maternity, fertility and beauty in Armenian mythology. In early periods, Anahit was the goddess of war. The head of Anahit’s bronze sculpture was found in Erznka city and is now being kept in the British Museum of London.
Posted by Flonastamp09 at 3:42 PM