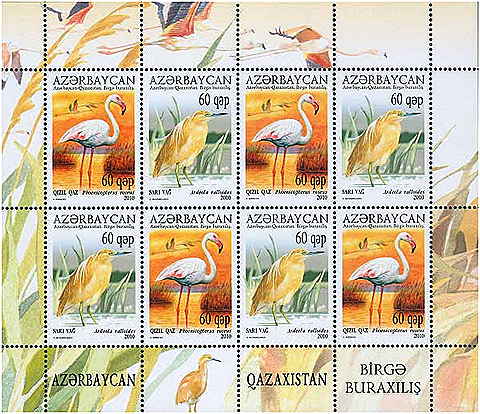 Azerbaijan Post and Kazakhstan Post have collaborated to issue stamps of Ecology of Caspian sea. The stamps depicted fauna of Caspian sea, The Greater Flamingo (Phoenicopterus roseus), and The Squacco Heron, Ardeola ralloides.

The Greater Flamingo (Phoenicopterus roseus) is the most widespread species of the flamingo family.It is found in parts of Africa, southern Asia and southern Europe.Most of the plumage is pinkish-white, but the wing coverts are red and the primary and secondary flight feathers are black.The bill is pink with a restricted black tip, and the legs are entirely pink. The call is a goose-like honking.

The Squacco Heron, Ardeola ralloides, is a small heron, 44–47 centimetres long, of which the body is 20–23 centimetres ,with 80–92 centimetres wingspan.It is breeding in southern Europe and the Greater Middle East.This is a stocky species with a short neck, short thick bill and buff-brown back. In summer, adults have long neck feathers. Its appearance is transformed in flight, when it looks very white due to the colour of the wings.