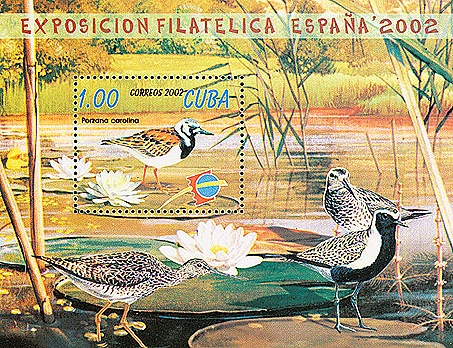 The Sora (Porzana carolina),as depicted on the stamp with value of 1 p, is a small waterbird of the family Rallidae, sometimes also referred to as the Sora Rail or Sora Crake.They are omnivores, eating seeds, insects and snails.The Sora's breeding habitat is marshes throughout much of North America. 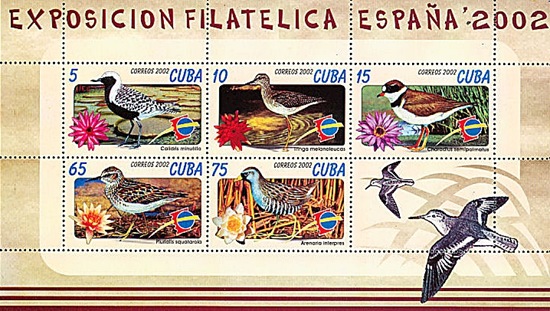 The Least Sandpiper (5c) or (Calidris minutilla) is the smallest shorebird that has greenish legs and a short thin dark bill.Their breeding habitat is the northern North American continent on tundra or in bogs. They nest on the ground near water.

The Greater Yellowlegs (10c) or Tringa melanoleuca, is a large North American shorebird.Adults have long yellow legs and a long, thin, dark bill which has a slight upward curve and is longer in length than the head. The body is grey brown on top and white underneath; the neck and breast are streaked with dark brown. The rump is white.These birds forage in shallow water, sometimes using their bill to stir up the water. They mainly eat insects and small fish, as well as crustaceans and marine worms.

The Semipalmated Plover (15c) or (Charadrius semipalmatus) is a small plover.They are migratory and winter in coastal areas ranging from the United States to Patagonia.These birds forage for food on beaches, tidal flats and fields, usually by sight. They eat insects, crustaceans and worms.Their breeding habitat is open ground on beaches or flats across northern Canada and Alaska. They nest on the ground in an open area with little or no plant growth.

The Grey Plover (65c) or (Pluvialis squatarola), known as the Black-bellied Plover in North America, is a medium-sized plover breeding in arctic regions. It is a long-distance migrant, with a nearly worldwide coastal distribution when not breeding.They forage for food on beaches and tidal flats, usually by sight. The food consists of small molluscs, polychaete worms, crustaceans, and insects.

The Ruddy Turnstone (75c) or (Arenaria interpres) is a small wading bird .It is a highly migratory bird, breeding in northern parts of Eurasia and North America and flying south to winter on coastlines almost worldwide. The Ruddy Turnstone has a staccato, rattling call and also a chattering alarm-call which is mainly given during the breeding season.