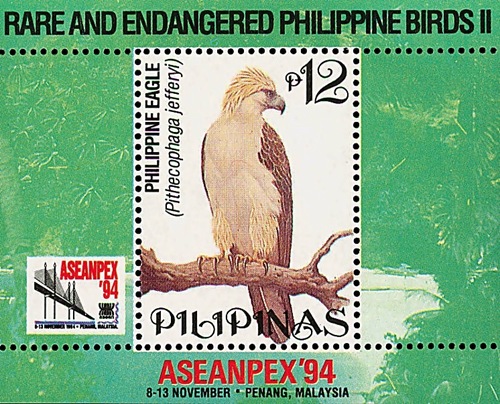 Aseanpex’94 was held on 8th till 13th of November 1994 at Penang, Malaysia . Philippine as member of Asean Community has been participated by issuing the souvenir sheet comprised of stamp depicted Philippine eagle (Pitthecophaga jefferyi). The sheet represented logo of Aseanpex’94.

The Philippine Eagle, Pithecophaga jefferyi, also known Monkey-eating Eagle, is among the rarest, largest, and most powerful birds in the world. This bird of prey is endemic to forests in the Philippines and to be as the national bird.

The Philippine Eagle's nape is adorned with long brown feathers that form a shaggy crest. These feathers give it the appearance of possessing a lion's mane, which in turn resembles the mythical griffin. The eagle has a dark face and a creamy-brown nape and crown. The back of the Philippine Eagle is dark brown, while the underside and underwings are white. The heavy legs are yellow with large, powerful dark claws, and the prominent large, high-arched, deep beak is a bluish-grey. The eagle's eyes are blue-grey. Juveniles are similar to adults except that their upperpart feathers have pale fringes