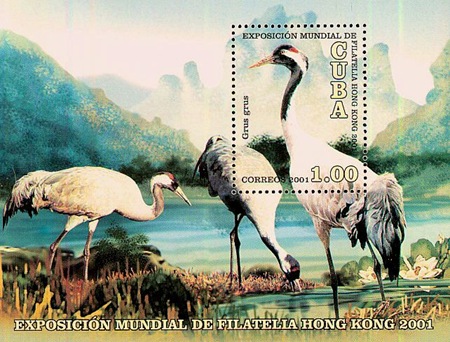 The Common Crane (Grus grus), also known as the Eurasian Crane, is a bird of the family Gruidae, the cranes.It breeds in wetlands in northern parts of Europe and Asia. The global population is in the region of 210,000-250,000, with the vast majority nesting in Russia and Scandinavia.It is a long distance migrant wintering in Africa (south to Morocco and Ethiopia), southern Europe, and southern Asia (south to northern Pakistan and eastern China). Migrating flocks fly in a V formation.

It is omnivorous, eating leaves, roots, berries (including notably the cranberry, which is probably named after the species), insects, small birds and mammals.The Common Crane is one of the species to which the Agreement on the Conservation of African-Eurasian Migratory Waterbirds (AEWA) applies.