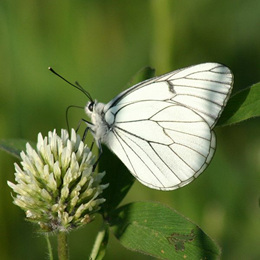 The Black-veined White (Aporia crataegi) is a large butterfly of the Pieridae family.It is found in orchards and bushes throughout most of Europe except Northern Europe, North Africa, temperate Asia, Korea and Japan.It usually feeds on plants in the genus Prunus. Flight time is between April and July, size is between 56mm and 68mm, and is normally found an altitudes between 500m and 2,000m.