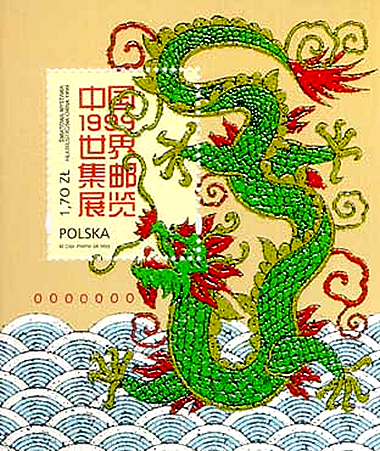 "China 1999" World Philatelic Exhibition held on August 21st-30th 1999 in Beijing, organised at the 50th anniversary of the foundation of the People's Republic of China.
To commemorate the participation in the Exhibition, the Polish Post introduced a stamp in the form of a block into the market. The stamp represents Chinese ideograms expressing the contents: "China 1999. World Philatelic Exhibition" and fragments of a dragon, constituting a symbol of happiness according to the Chinese mythology. The cover of the block presents the dragon and symbolic sea waves.
Posted by Flonastamp09 at 2:30 AM