15th Anniversary of Friendship and Cooperation between the Republic of Belarus and the Bolivarian Republic of Venezuela. 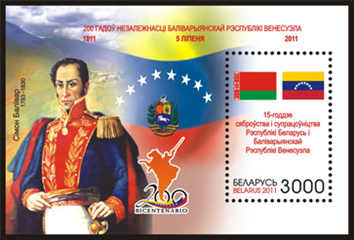 In 2011 the Republic of Belarus and the Bolivarian Republic of Venezuela celebrate the 15th anniversary of the establishment of relations of friendship and cooperation, which are dynamically developing during the last 5 years owing to independent politics of the both countries. 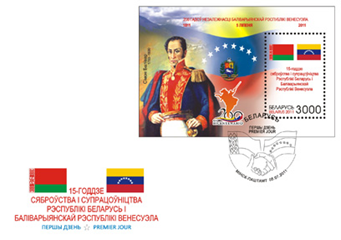 Venezuela is a country on the northern coast of South America. On July 5, 1811 the National Congress of Venezuela in Caracas signed the Independence Act of the country setting an example to other colonies of the Spanish empire on the American continent. The liberation was brought to Venezuela 200 years ago by Simon Bolivar.
Posted by Flonastamp09 at 3:31 PM