On September 28, 2011 the  Belarus Post issued  the souvenir sheet “Joint issue of the Republic of Belarus and Islamic Republic of Iran”.Designer of stamp is  Yevgeni Simonenko. The issue stamp feature the unique monument of both countries. 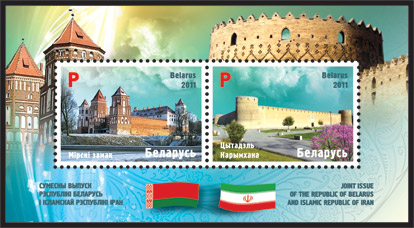 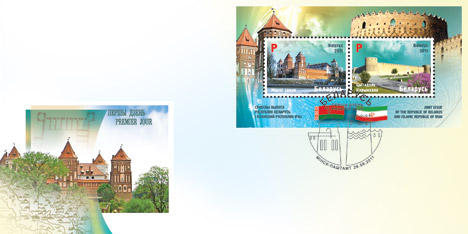 The Karimkhani Citadel in Shiraz is one of the most prominent architectural monuments of Iran. It was built in 1766 under Karim Khan Zend the ruler of Iran at that time. For its construction Karim Khan invited the most skilful architects, masons and painters. They used the best building materials. The fortress served as a royal palace and a military garrison. From 2008 the historical monuments of the Zends epoch in Shiraz are among the candidates for inclusion into the UNESCO World Heritage List.
Posted by Flonastamp09 at 6:24 PM