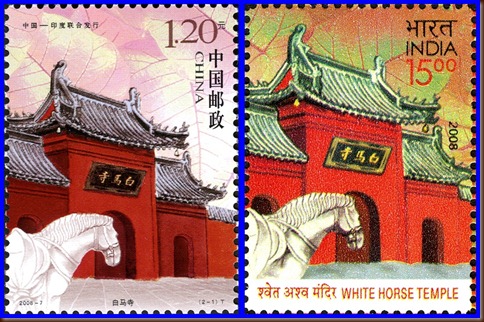 
White Horse Temple  is, according to tradition, the first Buddhist temple in China, established in 68 AD under the patronage of Emperor Ming in the Eastern Han capital Luoyang.The temple, although small in size in comparison to many other temples in China, is considered by most believers as "the cradle of Chinese Buddhism".The geographical landmarks to the south of the temple are Manghan mountain and Lucoche River

The main temple buildings, a large complex, were reconstructed during the Ming (1368 to 1644) and Qing (1644 to 1912) dynasties.They were refurbished in 1950s, and again in March 1973 after the Cultural Revolution.Significant statues include Śākyamuni Buddha, Maitreya-the laughing Buddha, the Jade Buddha, and figures of saints such as Guru Avalokiteśvara, Amitābha and arhats. Stone statues of the two white horses, which brought the Indian monks to China, and of two mythical lions are seen at the entrance. 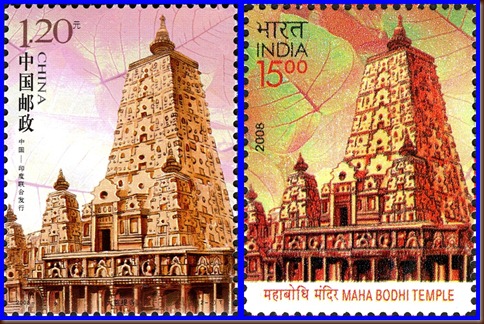 The Maha bodhi Temple  is a Buddhist temple in Bodh Gaya, the location where Siddhartha Gautama, the Buddha, is said to have attained enlightenment. Bodh Gaya (located in Gaya district) is located about 96 km  from Patna, Bihar state,India. Next to the temple, to its western side, is the holy Bodhi tree. In the Pali Canon, the site is called Bodhimanda, and the monastery there the Bodhimanda Vihara. The tallest tower is 55 metres  tall. The construction uses the styles of Dravidian Architecture, as opposed to Nagara Temple styles.
Posted by Flonastamp09 at 3:26 PM