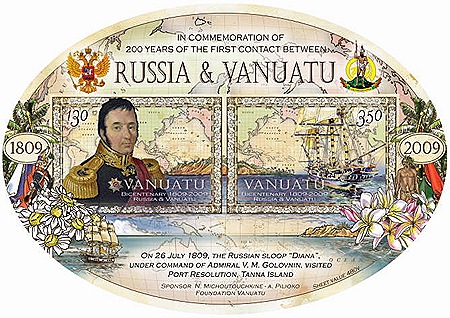 This stamp issue marks 200 years since the first Russian-Vanuatu contact celebrated on 28 July 2009 in Port Vila.

On 25 July 1807 the Russian sloop “Diana” under the command of V.M. Golovnin with a young crew of fifty-five sailed from Kronstadt, a Russian seaport town in the Gulf of Finland, to Petropavlovsk-in-Kamchatka in the far east of the country.  Its voyage was one of provisioning to the new Russian settlements in the Far East and North America as well as of surveying and discovery in North Pacific waters.
On 26 July 1809 the sloop found itself entering a small bay in the tropical Pacific named by Captain Cook “Port Resolution” and by Tanna islanders – “Uea”. “Diana” had no orders to call at Tanna Island - her arrival was a consequence of a dramatic and unlikely series of events, including capture by the British, an escape from Simon's Bay in South Africa, at dusk and in a storm, and an exhausting, uninterrupted passage across the Indian Ocean and Tasman Sea with the intention of avoiding all encounters with the British fleet or British merchantmen in Australian waters.
Tanna was chosen by V.M. Golovnin as their resting and revitalizing spot, well removed from normal shipping routes and likely to be free of Europeans, yet supplied with ample fruit, some drinking water, and a neatly charted harbour.

All, in fact, passed off as well as Golovnin could have desired, after tense initial meetings with a Kwamera-speaking Tannese group led by an elder called Gunama.  Drawing maximum advantage from the works of the two Forsters who, had been at Tanna with “Resolution” in 1774, Golovnin proceeded cautiously but amicably.  A single day produced, through barter at the water's edge, some forty feet of sugarcane, 400 coconuts or more, and yams.  Uea Bay, meanwhile, was surveyed by cutter, and Tannese weaponry and other artifacts were collected and can be now seen at St. Petersburg Kunstcamera Museum.  Full notes were taken about the evidence of tribal warfare, social structure, navigation, husbandry and diet, clothing, ornament, and language.   “Diana’s” visit to Uea Bay was beneficial in both practical and scientific terms.
Posted by Flonastamp09 at 7:14 PM