On November 18, 2008,  Vietnam  and Singapore  issued the stamp series shows the typical fruits of the two countries like  Dragon fruit of Vietnam and Durian fruit of Singapore. The each country only issued single stamps. 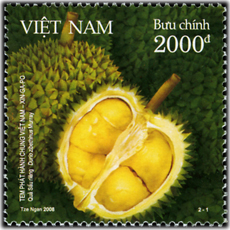 The Durian, native to Brunei, Malaysia and Indonesia, is the fruit of trees from the genus Durio belonging Malvaceae family. It is mostly planted in Singapore, Malaysia, Thailand, Indonesia, Philippines, Vietnam, India and Australia.
The fruit can grow up to 30 centimetres long and 15 centimetres in diameter, typically weighs one to four kilograms and formidable thorn-covered husk. The shell splits into five segments when ripe, exposing the creamy whitish, yellowish or pinkish aril which surrounds large seeds. The taste is sweet and unique odour. The durian is commonly known and revered in Southeast Asia as the "King of the Fruits". 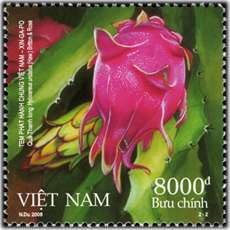 Britton & Rose. Dragon fruit, the fruit of several cactus species, is cultivated as a flowering ornamental tree or fruit-tree. It not known exactly where the dragon fruit originated, but it is thought to have come from Central and South America. The dragon fruits are also cultivated in China, Taiwan and Southeast Asian countries .
Vietnam Dragon Fruit is a spectacular night flowering cactus with highly ornamental pink skin & white flesh fruit containing numerous small black seeds. Fruit can be up to 1kg with a melon like flavour. Dragon fruits are valuable fruit export of Vietnam.
Posted by Flonastamp09 at 6:04 PM