Vietnam Post has issued the stamp series features their culture, Water puppetry, as commemorative stamp for their participation at the World  Expo USA 2000.
Water puppetry is a tradition that dates back as far as the 11th century CE when it originated in the villages of the Red River Delta area of northern Vietnam. Today's Vietnamese water puppetry is a unique variation on the ancient Asian puppet tradition.

The puppets are made out of wood and then lacquered. The shows are performed in a waist-deep pool. A large rod supports the puppet under the water and is used by the puppeteers, who are normally hidden behind a screen, to control them. Thus the puppets appear to be moving over the water. When the rice fields would flood, the villagers would entertain each other using this form of puppet play. 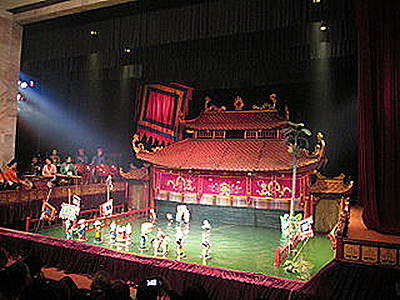 Modern water puppetry is performed in a pool of water 4 meters square with the water surface being the stage. Performance today occurs on one of three venues—on traditional ponds in villages where a staging area has been set up, on portable tanks built for traveling performers, or in a specialized building where a pool stage has been constructed . Spotlights and colorful flags adorn the stage and create a festive atmosphere. 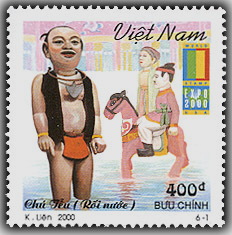 .
6-1: Little Tễu
The puppets are carved out of wood and often weigh up to 15 kg.Up to 8 puppeteers stand behind a split-bamboo screen, decorated to resemble a temple facade, and control the puppets using long bamboo rods and string mechanism hidden beneath the water surface. The puppets enter from either side of the stage, or emerge from the murky depths of the water. 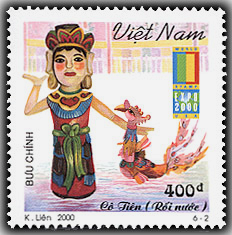 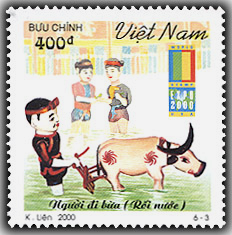 In ancient Vietnam, the rural Vietnamese believed that spirits controlled all aspect of their lives, from the kitchen to the rice paddies. The Vietnamese devised water puppetry as a way to satisfy these spirits, and as a form of entertainment, using what natural medium they could find in their environment 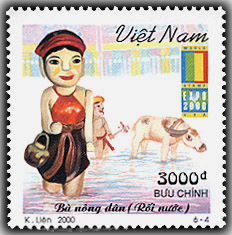 In ancient times, the ponds and flooded rice paddies after harvest were the stage for these impromptu shows.When the rice fields would flood, the villagers would entertain each other using this form of puppet play. 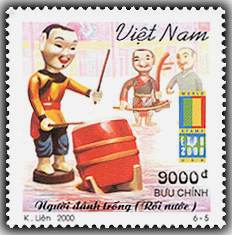 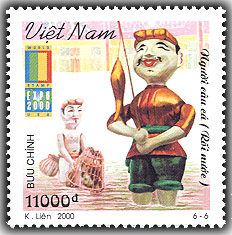 The theme of the skits is rural and has a strong reference to Vietnamese folklore. It tells of day-to-day living in rural Vietnam and Vietnamese folk tales that are told by grandparents to their grandchildren. Stories of the harvest, of fishing and of festivals are highlighted.(Resources from Wikipedia).
Technorati Tags: World Expo 2000,USA,Vietnam,Water-puppetry
Posted by Flonastamp09 at 8:28 PM