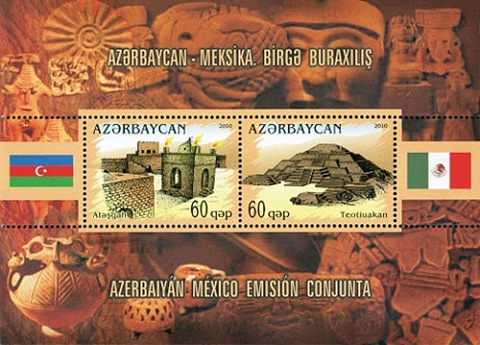 Azerbaijan Post and Mexico Post collaborated to issue the souvenir sheet featured the heritage building of their country on year 2010.  The sheet have background of their relieves  and flags . Azerbaijan Post issued stamp depicts the Baku Ateshgah meanwhile Mexico Post issued the stamp depicts Teotihuacan.
Teotihuacan is an enormous archaeological site in the Basin of Mexico, containing some of the largest pyramidal structures built in the pre-Columbian Americas. Apart from the pyramidal structures, Teotihuacan is also known for its large residential complexes, the Avenue of the Dead, and numerous colorful, well-preserved murals. The city was thought to have been established around 200 BCE, lasting until its fall sometime between the 7th and 8th centuries CE. At its zenith in the first half of the 1st millennium CE, Teotihuacan was the largest city in the pre-Columbian Americas. At this time it may have had more than 200,000 inhabitants, placing it among the largest cities of the world in this period. The civilization and cultural complex associated with the site is also referred to as Teotihuacan or Teotihuacano.
The Baku Ateshgah  or "Fire Temple" is a castle-like ancient Hindu religious structure in Surakhani, a suburb of greater Baku, Azerbaijan. "Atash" (آتش) is the Persian word for fire.The pentagonal complex, which has a courtyard surrounded by cells for monks and a tetrapillar-altar in the middle, was built during the 17th and 18th centuries. It was abandoned after 1883 when oil and gas plants were established in the vicinity. The complex was turned into a museum in 1975 and now receives 15,000 visitors a year. It was nominated for World Heritage Site status in 1998 and was declared a state historical-architectural reserve by decree of the Azeri President on 19 December 2007.
Posted by Flonastamp09 at 7:55 PM