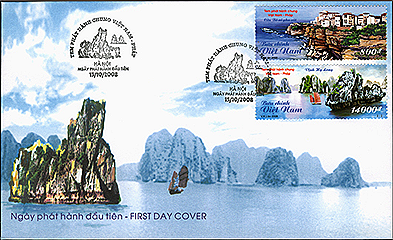 On the fifth of October 2008, Vietnam and France have been jointly issued in the first time.The stamp series depicts the sceneries of Ha Long bay (in Vietnam) and Bouches de Bonifacio (in France).

Value (2-2): Ha Long bay in Vietnam. Ha Long Bay is a UNESCO World Heritage site located in Quang Ninh province, Vietnam. The bay features thousands of limestone karsts and isles in various sizes and shapes. Ha Long bay consists of a dense cluster of 1,969 limestone monolithic islands with rich vegetation cover and many beautiful caves. This is not only one of the attractions famous in the world but also be introduced to nominate as World's 7 Natural Wonder.
Posted by Flonastamp09 at 7:50 PM