The Caspian seal (Pusa caspica) is one of the smallest members of the earless seal family and unique in that it is found exclusively in the brackish Caspian Sea. They can be found not only along the shorelines, but also on the many rocky islands and floating blocks of ice that dot the Caspian Sea. 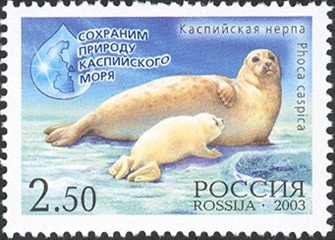 Caspian seals are shallow divers, with diving depths typically reaching 50 meters and lasting about a minute, although deeper and longer depths have been recorded. They are gregarious, spending most of their time in large colonies.

Due to a decline exceeding 50% over the last three generations, reduction in the number of sites used (range reduction within the overall geographic range), current hunting levels that almost certainly exceed sustainable harvest levels and the multiple ongoing negative impacts on the habitat of the Caspian Seal, this species should be classified as Endangered (EN).

The beluga  or European sturgeon (Huso huso) is a species of anadromous fish in the sturgeon family (Acipenseridae) .  It is found primarily in the Caspian and Black Sea basins, and occasionally in the Adriatic Sea. The beluga is a huge and late-maturing fish that can live for 118 years. 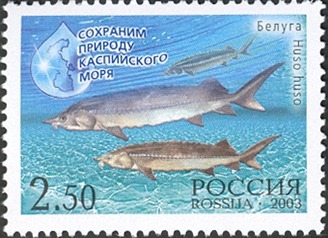 Heavily fished for the female's valuable roe—known as beluga caviar . The species numbers have been greatly reduced by overfishing and poaching, prompting many governments to enact restrictions on its trade.

IUCN classifies the beluga as critically endangered. It is a protected species listed in appendix III of the Bern Convention, and its trade is restricted under CITES appendix II.

The Mediterranean population is strongly protected under appendix II of the Bern Convention, prohibiting any intentional killing of these fish.