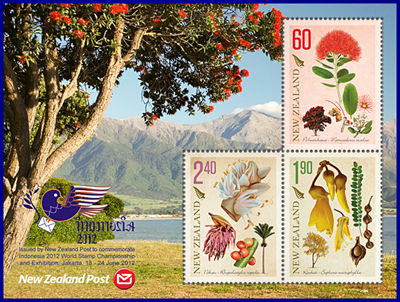 Indonesia 2012 – International Stamp Exhibition held from 18 to 24 June with the support of the Fédération Internationale de Philatélie and the Federation of Inter-Asian Philately, and  expected to be the largest philatelic exhibition ever held in Indonesia.

Jakarta is capital city of Indonesia, and is Indonesia’s largest and most populous city. Collectors and philatelic enthusiasts from Asia and around the world  attended the exhibition. 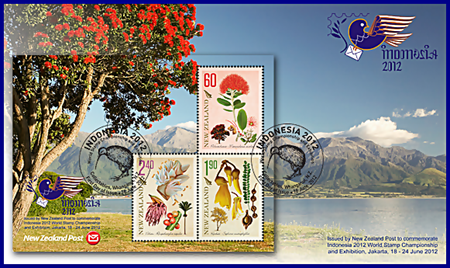 To commemorate Indonesia 2012, New Zealand Post is issuing an exhibition miniature sheet and exhibition souvenir cover. The exhibition miniature sheet incorporates three stamps from the ‘2012 New Zealand Native Trees’ stamp issue. The stamps are set against a picturesque image of a pōhutukawa tree in Kaikoura in New Zealand’s South Island.
Also featured in the design is the official Indonesia 2012 logo - a letter-carrying pigeon in the batik style. Pigeons are known around the world as a symbol of peace and were historically used as message carriers.