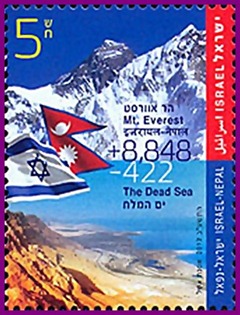 Israel and Nepal established full diplomatic relations in 1960. The Prime Ministers at the time were David Ben Gurion of Israel and B.P. Koirala of Nepal.

Nepal was among the first Asian countries to establish relations with Israel and one of the only bold nations that did not support the 1975 United Nations resolution equating Zionism with racism. That resolution was subsequently revoked some 20 years later. Over the years, the two countries have created a diverse network of cooperation and close ties in various areas.

To celebrate the anniversary of their diplomatic relationship,  they joint issue to release  one stamp depict the geographic of both countries, the Himalaya Mountain and the Dead Sea on September 04, 2012.