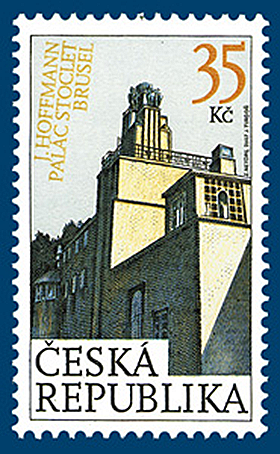 “the postage stamp with the exterior features a detail of the tower ending with a dome and four figures.”

The theme of the common Czech-Belgian issue is Stoclet Palace in Brussels designed by the Czech native Josef Hoffmann (1870-1956). Stoclet Palace, built in 1905-1911, is considered as his supreme work of architecture.
The two postage stamps, which issued with the same graphic design both in the Czech Republic and in Belgium, feature the exterior and the interior of the palace on March 26, 2007.
Josef Hoffmann was born in Brtnice na Morave, studied in Jihlava and Brno and continued his studies at the Viennese Academy. For four decades he was a professor of architecture at the Industrial Art College in Vienna. He became the best-selling architect and a co-founder of the artists' association Secession.He designed numerous private villas and palaces.Hoffmann launched a huge amount of designs of diverse equipment and accessories. 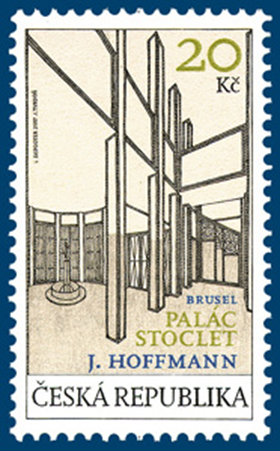 
Stoclet Palace was therefore designed and built according to a uniform design covering both the construction and furnishing aspects. The palace has numerous Art Nouveau elements which are however combined in a so-phisticated way with direct lines of the classical style.
The author of decorations for the framing elements in the dining room is Gustav Klimt. The palace is set in a large garden designed in a corresponding style.


J. Hoffmann is also the author of several buildings in the territory of the Czech Republic.
Posted by Flonastamp09 at 6:38 AM