The Nordic Philatelic Exhibition, Nordia 2009 held in Hafnarfjörður Iceland 29th-31st May 2009. The motif on the souvenir sheet which Iceland Post issued on this occasion is the puffin.

The Puffin (Fratercula arctica) is a pelagic bird belonging to the Auk family. The latin term Fratercula means „little brother“ and indicates the colours of the feathers which is reminiscent of the robes of monks. The bird has also been called a “dean” or a “priest” in Icelandic. The puffin’s beak is multicolored during the mating season. The puffin is a resident bird. They lay their eggs in holes, dug into the ground, in big colonies. During winter the puffin stays at sea. The motif shows the puffin in Vestmannaeyjar island with the glacier Eyjafjallajökul in the background. 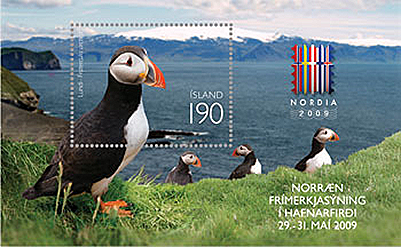