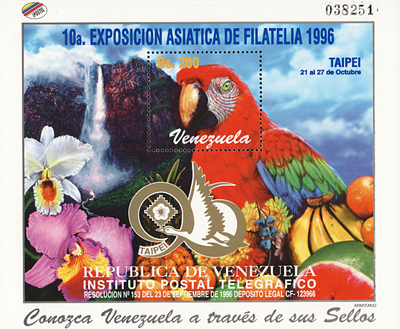 Venezuela Post has issued a souvenir sheet which comprised one stamp feature species Red and Green macaw ( Ara chloropterus). The other image on the sheet various tropical fruits , orchid and water fall as background image. Logo of Taipei 96 printed in the bottom middle. The issuance as commemorative stamp of Venezuela's participation at The International Stamp Expo Taipei 1996.

Ara Chloropterus, or The Red and green Macaw, is the largest of the Ara genus, widespread in the forests and woodlands of northern and central South America. In recent years there has been a marked decline in its numbers due to habitat loss and illegal capture for the parrot trade.

The Red-and-green Macaw has characteristic red lines around the eyes formed by rows of tiny feathers on the otherwise bare white skin patch. Iridescent teal feathers are surrounded by red on the tail.The Red-and-green Macaw has a very powerful beak which can generate a pressure of 2000 psi and can snap a broomstick in half.This powerful beak has evolved to crush or open even the hardest nuts and seeds.