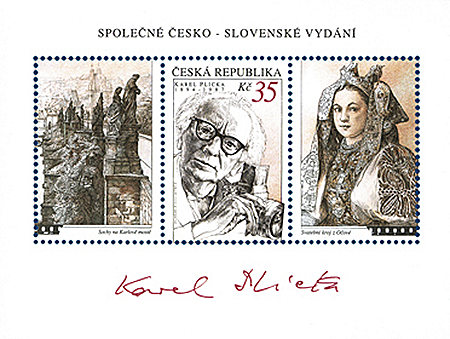 Czech Post and Slovakia Post has joint issued stamp with theme of the personality and work of the artist of comprehensive gifts and activities K. Plicka (1894-1987).

Karel Plicka is a part of the culture of two - Czech and Slovak - nations. A distinguished photographer and film maker, he was active also in music and singing. His broad artistic activities in ethnography together with his sensitivity of an artist and musician enabled him to record both in notation and on photographs and film tapes the disappearing world of folk traditions, tales, songs and way of life.

He was also a significant teacher. He was first engaged as a teacher at the School of Crafts in Bratislava, later as a professor and the first dean of a newly established Film Academy of the Academy of Arts in Prague.

Plicka graduated in 1913 from the Teacher School in Hradec Králové, in 1928 from Komenský University in Bratislava in music science, ethnography and art history.

In 1937-39 he set up and headed the first film vocational centre of the School of Crafts in Bratislava. During World War II he worked in Prague where he published the book Prague on K. Plicka's Photographs.

From the 50s he worked exclusively as a photographer (books of photographs Prague Castle, The Vltava River, Homeland The Beautiful, Levoca, etc.). A famous photographer, Plicka was highly appreciated both locally and internationally for his film documentaries (he won the Venezia Cup for his music poem Singing Country in 1934).