Vietnam Post has issued the bird stamp series for commemorating the participation at the International Stamp Exhibition, Phila Korea 1994. The issuance in one souvenir sheet and one set of 6 pieces stamps. The featured species of bird are Eurasian Curlew, Wilson’s Storm Petrel, Great Frigatebird ,Cape Gannet ,Tufted Puffin ,Belcher's Gull and Germain’s Swiftlet. 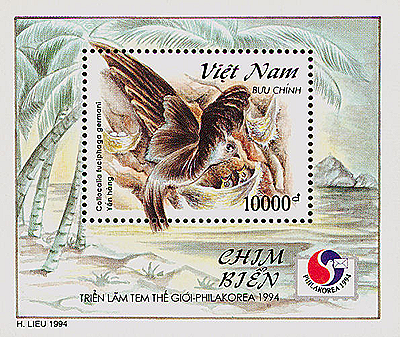 Germain's Swiftlet (Aerodramus germani) is a species of swift and can be found in China, Indonesia, Laos, Malaysia, Myanmar, the Philippines, Singapore, Thailand, and Vietnam.This swiftlet is 12 cm long and weighs 13 to 14 grams. The plumage is blackish-brown above, but much paler on the underparts. The tail is slightly forked and the wings are long and narrow. The bill and feet are black.This swiftlet feeds over a range of habitats from coastal areas to the mountains. Its diet consists of flying insects which are caught on the wing. 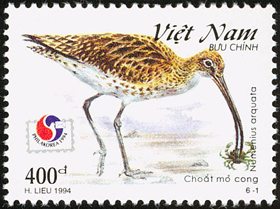 The largest wader in its range, at 50–57 cm length, and a 1 m wingspan. It is mainly greyish brown, with a white back, and a very long curved bill.This is a migratory species over most of its range, wintering in Africa, southern Europe and south Asia. 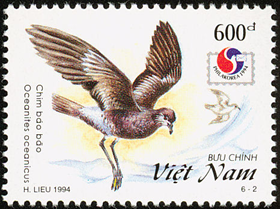 Also known as Wilson's Petrel, is a small seabird of the storm-petrel family . It is one of the most abundant bird species in the world. 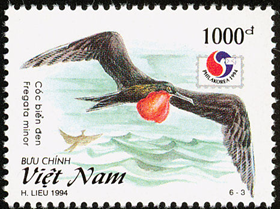 The Great Frigatebird is a lightly built large seabird up to 105 cm long with predominantly black plumage. Major nesting populations are found in the Pacific (including Galapagos Islands) and Indian Oceans, as well as a population in the South Atlantic. 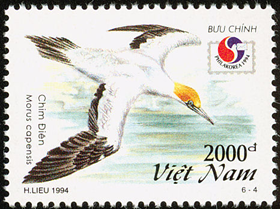 The Cape Gannet, Morus capensis, originally Sula capensis, is a large seabird of the gannet family, Sulidae.Easily identified by their large size, black and white plumage and distinctive yellow crown and hindneck. 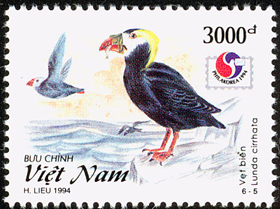 The Tufted Puffin (Fratercula cirrhata) is a relatively abundant medium-sized pelagic seabird in the auk (Alcidae) family found throughout the North Pacific Ocean. It is one of three species of puffin that make up the Fratercula genus and is easily recognizable by its thick red bill and yellow tufts. 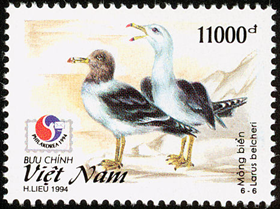 The Belcher's Gull (Larus belcheri), also known as the or Band-tailed Gull, is a gull found along the Pacific coast of South America.It is a medium-sized gull with a blackish mantle, white head and underparts, a black band in the otherwise white tail, and a yellow bill with a red and black tip. Non-breeding adults have a blackish head and a white eye-ring.