The presented post stamps have been produced as a result of the cooperation of Polish Post with China Post. They present museum exhibits of goldsmith mastery: a cup from the Manchurian Qing dynasty of the 18th century and a silver Gdansk mug produced in the period 1660-1680. 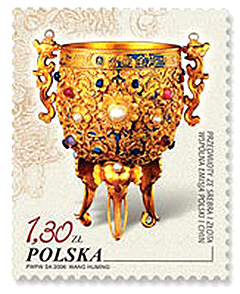 The Jin Ou Yong Gu cup, made of gold and decorated with pearls, rubies and sapphires can be found in the Emperor's Palace in Beijing. Apart from rich floral ornaments it draws attention by characteristic handgrip handles in the form of dragons and by legs in the form of elephant heads.

The cup was used by the emperor during the ceremony of the welcoming of the New Lunar Year. At that time the ruler poured tusu wine into the cup and then calligraphically wrote a text assuring the country prosperity, safety and unity. The cup symbolized the everlasting rule and the permanence of the Qing dynasty. 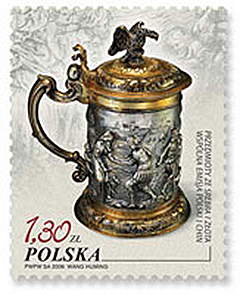 The baroque, partially gilded mug is an example of a vessel of secular character, many of which were ordered at handicraftsmen by rich Polish nobility and middle class. It includes a decoration of moralizing content. The goldsmith Peter Rode (Rohde) depicted on the mug two biblical scenes of the life of Joseph, son of Jacob, with the technique of hand made forged ornaments and scenes.

The eagle placed on the top of the lid symbolizes divine might, justice and care spread over people as righteous as the biblical Joseph. The mug comes from the collection of the National Museum in Warsaw. The presented stamps will be issued by both Posts at the same time.