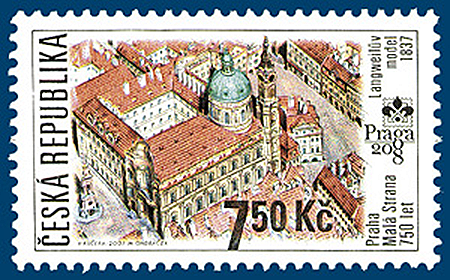 This stamp was issued on March 2007 for promoting the World Stamp Exhibition PRAGA 2008 which is to be held on September 12-14, 2008 at the Prague-Holešovice Exhibition Grounds.The postage stamp commemorating the 750th anniversary of foundation of the Lesser Town features a detail of Langweil's model of Prague, a unique work of art, document and rarity. The model was created in 1826-1837 by Antonín Langweil .
The model detailed with a maximum accuracy the colours of face walls, house signs, inscriptions and numbers as well as different types of roofs. One can see piles of wood, small walls and ladders on the back yards. The model sized 5.76 m by 3.24 m is displayed in the Museum of the City of Prague.
The detail on the postage stamp features the Lesser Town Square with the former town hall, Smirický Palace and Sternberg Houses on the northern side of the square, St Nicholas' Church, the former Jesuit college and the neighbouring blocks of houses.
The Prague preservation area of Lesser Town is one of the most attractive highlights of Prague. The King Premysl Otakar II founded the so-called New Town below Prague Castle, called from the early 14th century the Lesser Town of Prague, in the outer castle settlement in the area of today's Lesser Town Square. The Emperor Charles IV substantially extended the settlement by including the neighbouring settlements and erecting new walls (the so-called Hungry Wall).
The today's shape of the Lesser Town comes mainly from the 17th and 18th century, the time of construction of pompous baroque palaces, churches and monasteries. In 1784 the Lesser Town lost its status of an independent town and became one of the districts of the united Prague.
Blogger Tags: Lesser Town, Praga 2008, Czech
Posted by Flonastamp09 at 3:49 PM