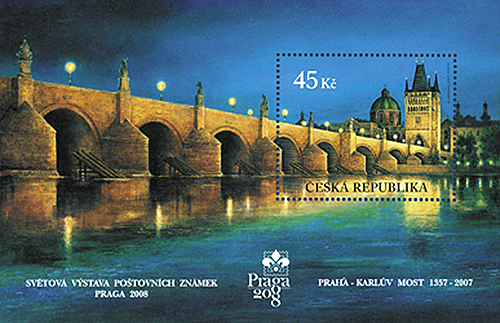 This stamp designed by Czech Post for promote the World Stamp Exhibition PRAGA 2008 which is to be held on September 12-14, 2008 at the Prague-Holešovice Exhibition Grounds.The miniature sheet and the postage stamp commemorate the 650th anniversary of the beginning of construction of this gothic jewel.The sheet issued on June 20, 2007.

Charles Bridge is the oldest bridge in Prague. It belongs to the most beautiful bridges in the world. Originally it was called the Stone Bridge, later Prague Bridge. In 1870 it was renamed Charles Bridge. It is located in the place of the original Romanesque Juditin Bridge, destroyed by the 1342 floods. The base stone of the new bridge was laid by the Emperor Charles IV on 9.7.1357 at 5:31 a.m., which was the best time according to astrologers. The construction was committed to Petr Parlér and his works. The bridge, almost 520 m long, up to 10 m wide and based on 16 arches, was finished in 1402. At that time it belonged to the largest ones in Europe. It is made of sandstone blocks and protected by towers erected on both its ends.

The Old Town Bridge Tower is considered as one of the most beautiful gothic buildings. The bridge is the gallery of 30 mostly baroque sculptures made, inter alia, by M. B. Braun and F. M. Brokoff. The sandstone original sculptures have gradually been replaced with replicas. Until the 20th century Charles Bridge was used as a major way of communication. From 1965 it has been used by pedestrians only and is one of the most attractive Prague sights.